Well, I'm back from another successful trip to Brazil.  I'm still going through photos and entering eBird checklists but I wanted to give you all a sneak peak at some of the birds I was lucky enough to see down there.  All in all I got over 60 lifers on this trip, and some shorebird highlights included Curlew Sandpiper (second year in a row), 19 Bar-tailed Godwits (new high count for Brazil), 5000 Scarlet Ibis (eBird world high count all at once!), 3 Marbled Godwits (very rare in Brazil), and close to 20,000 Semipalmated Sandpipers, among lots of other cool birds.  Some great northeast Brazil specialties that we got included the Araripe Manakin (discovered in the last 30 years), Red-necked Tanager, Gray-breasted Parakeet (critically endangered), and Gould's Toucanet among countless others.

Here is a taste of what will be coming in the next week or so. 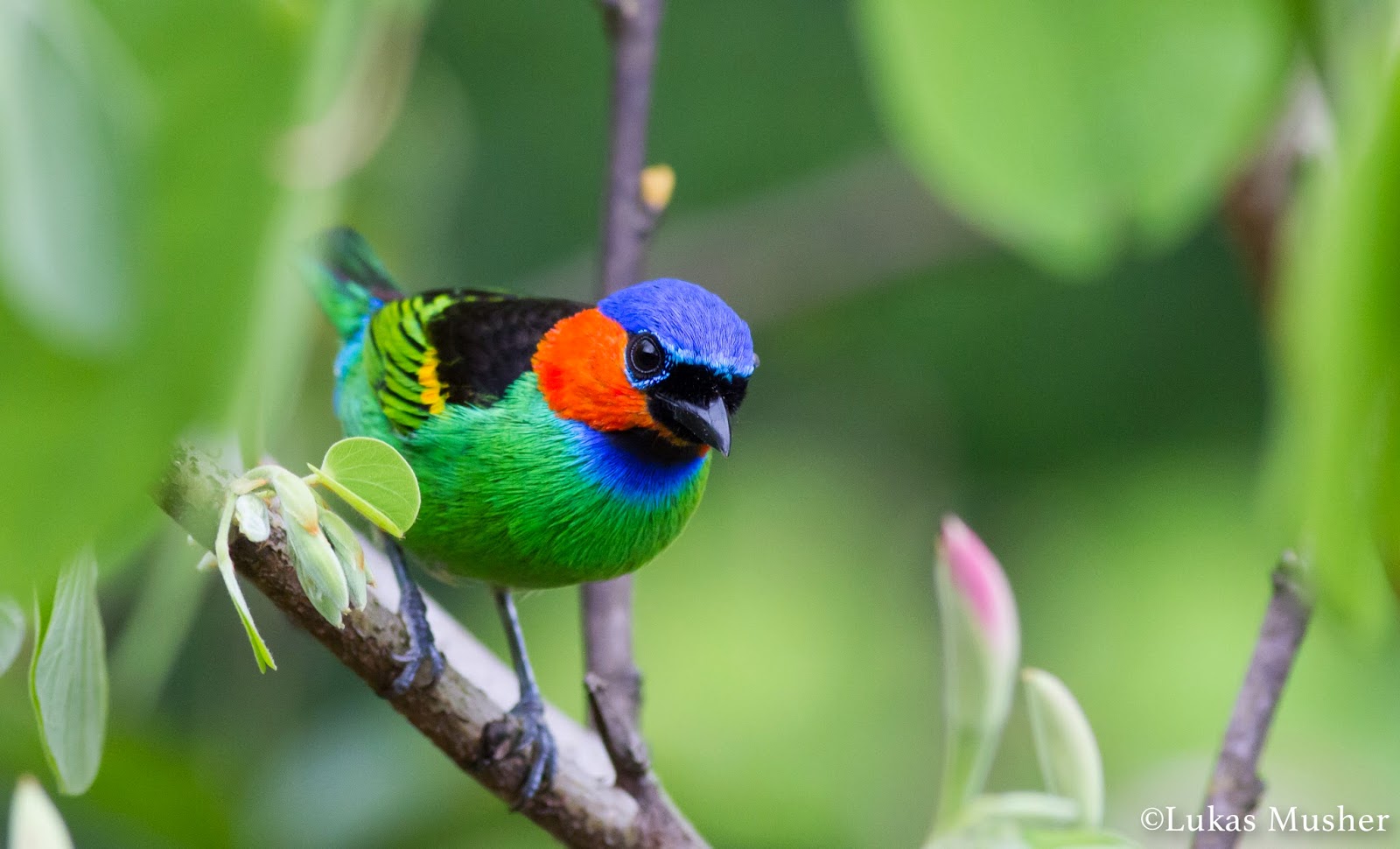 Leaving tonight to head back to Brazil to study Semipalmated Sanpipers in Northeastern Brazil.  Last year we had lots of cool birds to brag about including Curlew Sandpiper and Bar-tailed Godwits, and dozens of other interesting and beautiful tropical and coastal species!  This year we'll be taking three days at the end to do some birding in Caatinga, a unique and beautiful ecosystem with loads of endemic species!

Wish us luck and see you in three weeks!

Elephant Seals, E-seals, Mirounga: What's not to love about these guys.  They loaf all day in gulches and are the most appetizing prey to great white sharks.  They might be the best of the Pinnipeds on the Farallones. 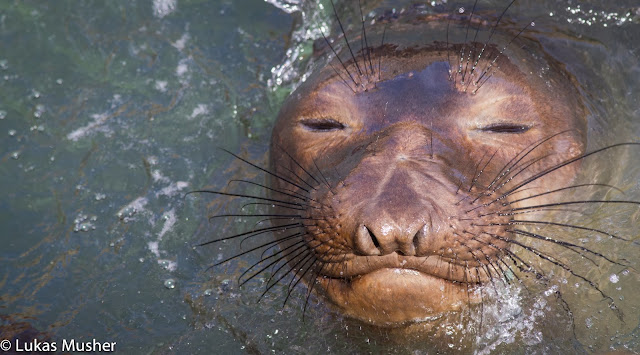 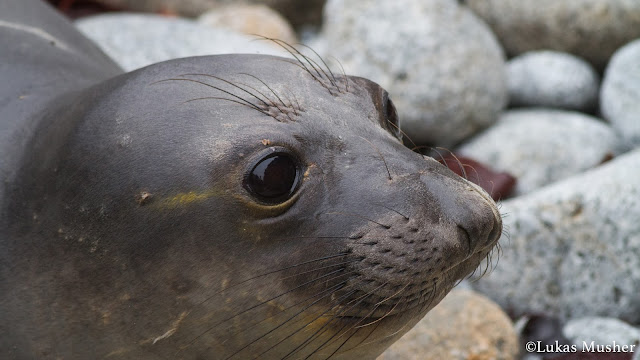 All about "Crane Crane" the Sandhill Crane

The date was September 26, 2013.  It was a windy day.  Bad weather had pretty much dominated the forecast for several days.  I was outside when I heard Jim's thunderous voice come through the radio, "Sandhill Crane, there's a Sandhill Crane over East Landing."  I ran out the door and there was a crane flying in closer and closer.  This was the second record of Sandhill Crane so everyone was ecstatic.

Eventually the bird landed, and we crept up to get some photos.  Little did we know, this bird would stay with us for a while.
We all felt sorry for this poor juvenile crane who must have gotten separated from her flock, and blown off course to end up on this place – surely a wasteland for any crane.  But on the first day, Don Mastwell took a dead mouse from the mouse trap, chirped a sweet trill the bird's direction, and dangled the tiny rodent by its tail out for the bird to see.  The crane, soon to be named Craney Crane, followed by Crane Crane, approached skeptically and plucked the mouse from Donald's hand.  It was love at first sight.  Crane Crane loved Dan, and Dan loved Crane Crane. 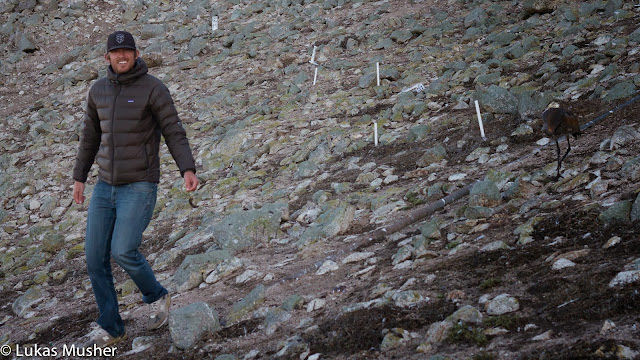 Before long all of us were feeding this lucky bird straight from our hands.  But we knew that wasn't right.  This was a wild animal after all and it had to learn how to forage by herself.  I began giving her foraging lessons.  I would sit down and start digging under rocks, turning up beetles and brown funnel-web spiders plump and ripe to a Crane's tastes.  But still, she was getting too close.  She took too much of a liking too us.
One day we had a huge wave of migrants and all of us were up on the hill looking through flocks of sparrows and Hermit Thrush (and one Williamson's Sapsucker) only to look out at Crane Crane circling up higher and higher then circling around us.  She tried to land at the lighthouse a few times, chirping at us all along.  She was jealous of the other birds. 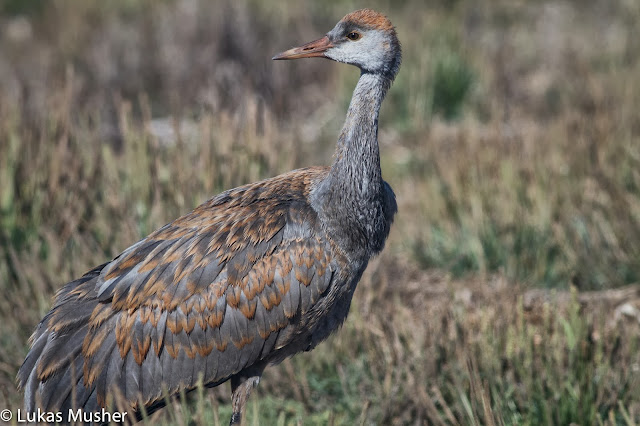 We all decided that the crane, Crane Crane, had overstayed her welcome.  We stopped feeding her and foraging with her hoping that she would begin fending for herself.  We loved the Crane, sure, and that's why we needed her to forage alone.  She needed to build up enough energy to get away, but not have a reason to stay. 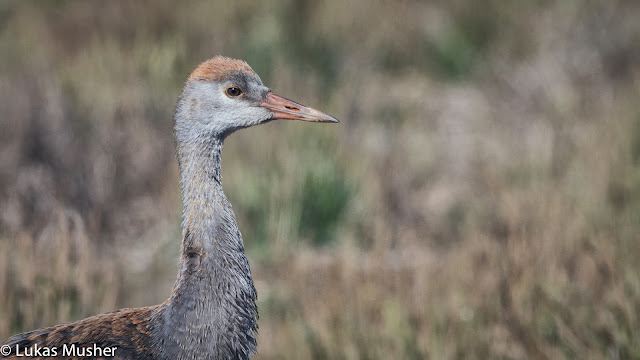 We saw her foraging often, then, even catching her own mice and her own spiders.  We chased her away from our nets so that she wouldn't try to eat our captured birds, and she grew afraid of us.  She started paying close attention to the Brown Pelicans as they flew over, often tilting her head up towards them and calling to them.  Eventually she began flying out over the ocean with them.  Each time she got further and further away before heading back.  She was ready to go. One day Don woke up and looked outside at Crane Crane foraging as usual.  Later that morning she was nowhere to be found.  Two days later a juvenile Sandhill Crane was seen in Napa.  I like to think that that was our Crane Crane.
Posted by Luke Musher at 11/06/2013 12:12:00 AM 1 comment:

Today I got to do some birding back in Marin county after a long time gone.  We dipped harder than a hillbilly on christmas looking for an American Tree Sparrow in Point Reyes Station, but that's okay because we (Ryan DiGaudio, Megan Elrod, Cameron Rutt, Mark "Mad Dawg" Dettling, and I)  found a Red-throated Pipit at Abbott's Lagoon.  This is my third of this species in just over two weeks so I guess I should be good at identifying them by now.  The best way to find these guys is by listening for their diagnostic call, a short, high, thin, descending pssseeee when near a flock of pipits. 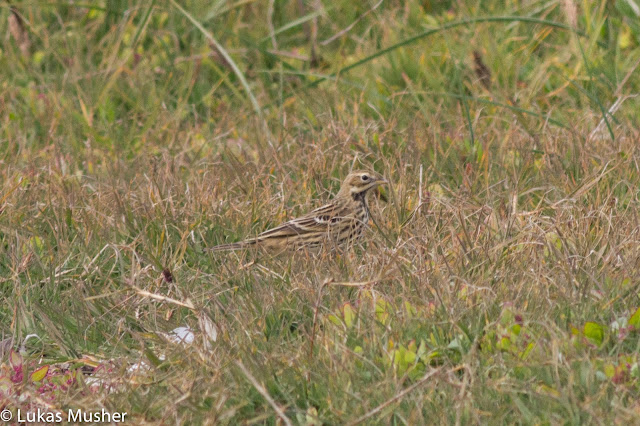 All I can do for you right now is tell you that there are three good photos here.  We had a Yellow-green Vireo the other day.  Otherwise, the shit storm continues.  Forgot to remove the spots from my lens.  Sorry.
Hope you enjoyed.  I wish I could do more for you.  Remind me to tell you all about our new resident juvenile Sandhill Crane whom we have adopted as our own.  His/her name is Craney Crane.  I'll fill you in soon enough.

HRBO's annual Hawk Weekend Festival runs during the third full weekend in September, so it starts tomorrow (Friday, September 20th) and runs through Sunday. Since September started on a Sunday this year, the September 20th start date is the latest since 2002. I've been worried that the festival may be a little too late to catch the Broad-wing migration, so I looked into the hawkcount.org data for the past ten years to see what we can expect for this weekend.

With that being said, September 20th is a bit late in the season for the Broad-winged Hawk peak, but they have peaked this late in the past. Also, we have only had two 1,000+ Broad-wing days this season—against an average of 5.3. Furthermore, we have had a week of unfavorable winds from the south or east and a couple days of fog and rain. This weather is supposed to clear out for the weekend, and leave us with favorable west or northwest winds—just in time for Hawk Weekend.

With the good weather headed our way and a history of some big Broad-wing days around this time of the season, this weekend looks like it is shaping up to be a good one! Here are some birds that are coming through right now, and you can expect to see them at the Ridge this weekend.
All photos were taken at Hawk Ridge Bird Observatory, St. Louis County, Minnesota.

Boom Chachalaca was started by Cory Ritter and Lukas Musher in November 2011 as a way to share birding experiences, tips, and news with other birders, both beginners and experts, and to promote conservation.